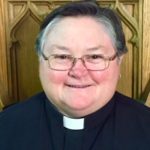 Rev. Helen Prior (who prefers to be called “Helen” or “Reverend Helen” – if you feel the need to use a title) was born into a traditionally British Methodist family filled with ministers and church musicians.  She had her faith nurtured at Washington United Church in Scarborough, Ontario.  In 1987 Helen completed a BSc in Agriculture at the University of Guelph.  After becoming proficient with a pitch fork and a disagreement with a dairy cow named Bramble, she heeded a call to ministry and has served as an ordained minister in the United Church of Canada since 1992.  Helen has served four pastoral charges as a settled minister and has completed six intentional interim ministries in Toronto, Saskatchewan, Bay of Quinte, and Hamilton Conferences.  As part of her service to the wider church, Helen enjoys teaching as faculty with the Interim Ministry Network, which has primary responsibility for training future interim ministers across North America.

Helen has a reputation for using her pastoral skills and sense of humour to invite congregations into dialogue, and helping polarized groups come closer together.  In her spare time Helen enjoys good music and entertainment, being walked by their pups, and spending time with friends and family..  Helen is enjoying meeting and working alongside families of Grace United Church in North Burlington as together we grow in our faith.